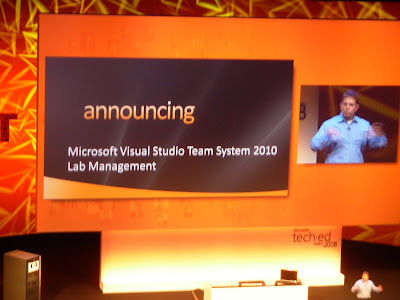 Jason Zender Announcing the VSTS 2010 Lab Management
Jason Zander kick start Tech·Ed EMEA Developers with his keynote presentation. Jason discusses what the team is doing as the leader of the Visual Studio division at Microsoft to make a developer's job easier with Visual Studio 2010, the next release of the market leading Visual Studio toolkit, and provides extensive examples with Visual Studio 2010 demonstrations.
He has announced again the release of the first available CTP for VS.NET 2010. It is important here to highlight the new features that he has already talked about
Posted by Ahmed Bahaa, Ph.D.,MS RD, and MVP at 6:07 AM