Team Foundation Server Power Tools is a set of enhancements, tools and command-line utilities that improve the Team Foundation Server (TFS) user experience. It is a genius idea for making TFS and the Team system as whole able to cope with the wonderful ideas that pop up to improve it usage experience as well as it is perfect idea to respond to the market needs in a faster way.

The Team Foundation Server 2010 Beta 2 Power Tools have been released and are now available for download.

Brian harry has just announced that EMC (formerly from Conchango) has recently released a Beta of a new release of their popular SCRUM for Team System.  This Beta is designed to work with TFS 2010 Beta 2.  You can find download details here:

Microsoft Has just released two updates (one a QFE for the TFS object model and the other a new version of the Team System Web Access Power Tool) that should significantly improve the scalability. Most of the issues fixed had to do with memory over allocation or leaking that resulted in memory exhaustion and process recycling.

You can get the updates here:

And you can read a bit more about it on Hakan's blog:

Microsoft Has just reported a known issue of installing TFS 2010 over Windows 2008 R2. For all people who are welling to install TFS 2010 Beta 2 over This version of windows, please read the following to know how to solve the problem with a recommended workaround from the Team System Product Team.

After installing Team Foundation Server 2010 Beta 2 on a Windows 2008 R2 server, when you navigate to Web Access site, you get the following error message:

Parser Error Message: Could not load file or assembly 'System.Web.Extensions, Version=3.5.0.0, Culture=neutral, PublicKeyToken=31bf3856ad364e35' or one of its dependencies. The system cannot find the file specified.

Since NET 3.5 is not available after TFS installation, Web Access is broken.

The workaround is to enable NET Framework 3.5 feature on Windows 2008 R2 using the Role Manager.

TFS 2010 represents a huge step forward in making TFS more approachable by smaller teams.  With software development technology continuing to advance and SourceSafe slowly looking older, TFS 2010 is a great opportunity for SourceSafe users to look at updating their toolset.

There are 3 main areas that we’ve focused on in 2010 to make TFS attractive to smaller teams:

And that’s it – TFS is installed and ready to use.  There’s a similarly (but not quite as) easy wizard for configuring a build server on the same machine…

All of this gives you a development system with Version Control, Bug tracking and build automation (making continuous integration a snap!).  What it lacks from Standard TFS is Sharepoint and Reporting capabilities.  The great thing though is that TFS "Basic” IS TFS so as your needs grow you can reconfigure it to add more capabilities.

It’s a really exciting development and I hope you really like it.  I encourage you to get TFS 2010 Beta 2 when it is available later this fall and give it a try.

Today, is my first day at TechEd Berlin, 2009. despite of starting two days ago, i couldn’t come earlier due to some work commitments. Actually I decided to come to TechEd this year even if I am late due to My Commitment to the Team System Ask The Expert Booth, and I got my Prize for that once i got in :)

Once I got to the Booth which was the first thing to do once i got to the Event, I met The great Brian Harry again along With Stefanie Saad the TFS Group Program Manager. Stefanie told me that they Kept the MSF Agile Template with a new version (5.0) into the 2010 release of the TFS. She told me that one of the major drivers for this was my continuous efforts of convincing the product team that MSF agile Template is a crucial part for lots of companies.

This means that my efforts has succeeded to keep MSF Agile Template, and now i am part of the history of this release Which is really something i will be proud of always.

Actually, 12 months ago, the product team was thinking of removing this template from the TFS but, I tried to work hard and keep the communication always opened trying to convince them that this is a very harmful action to the Team System.

Because of the fact that Microsoft is a customer Oriented SW producer, they heard my concern with passion finally, decided to keep it based on lengthy exercise that made them sure of my Opinion. Everyday i work with Microsoft people I became more sure that the voice of customer and the benefit of customer is the major concern at all Microsoft Decision that always driven by voices of the Market. Thank you Brian, thank you Stefanie, Thank you Team System, and Thank you Microsoft :)

What Makes Brian’s story is more compelling now is the fact that it is more recent. The two stories have 20 years gap between them. this like a full edge into the Geology science. This means that Brian’s story seems closer and more applicable now because it depends on regular Idea and a doable application Which is Sources Safe(which was the first GUI source control tool for Microsoft development to be used), while Bill’s story was depending on a full new technology (applications over Microprocessors). I invite you the here a fast track of this story as has been narrated by Brian himself. This is the First part , I will write the second part to concentrate on the Technical Part of TFS 2010 vs.. Source safe.

I hope to enjoy both parts :)

We started building SourceSafe in January 1992 in the vacated dining room of the house belonging to one of my partners.  Within a couple of short years SourceSafe went from concept to major success and was acquired by Microsoft in 1994, soon after which it became the most widely used version control system in the world.  The thing that was truly novel about SourceSafe in the early 1990s was that it was really easy to learn and use.  People tried it and just liked it.  It wasn’t the most powerful system around but it had what people needed and was a refreshing break from complicated command line oriented interfaces.

However SourceSafe was designed and built in the early 90’s and a lot has changed since then.  Technologies are different – the internet really didn’t exist in a meaningful way (web browsers were in early experimentation), databases were still complicated products primarily used for enterprise mission critical data, etc; and development is a lot different – projects were much smaller and less sophisticated then.  The emergence of Visual Basic in the early 90’s really changed the landscape of development and brought a lot of people into the field who would have never previously considered it and made custom software a much bigger part of people’s lives.

Other trends have developed and gained a great deal of momentum.  Frustration with traditional ways of executing software projects, the Agile set of development methodologies have become VERY popular, bringing with them a new set of practices - unit testing, continuous integration, TDD, and more.

Right around the beginning of 2003 – almost 11 years after beginning the SourceSafe journey, I and a few other people embarked to create Team Foundation Server.  The goal was to create a development team collaboration product that would meet the needs of virtually any development team for the next couple of decades.  It is based on modern technologies – SQL Server, ASP.NET, Web Services, .NET, etc.  And it takes a comprehensive view of the software development lifecycle, with the intent of ultimately addressing all phases and all participants.

To make sure we could handle the broadest range, we started by targeting enterprise customers and development teams with more involved development processes.  The pinnacle of that has been the Microsoft Developer Division experience that I’ve talked so much about where we have over 3,500 regular users and Terra bytes upon Terrabytes of data.  However, it has been our intention from the beginning to build a toolset that is attractive to teams of all sizes and all levels of process.

For smaller teams, the most common complaints about TFS 2005 were that it was expensive, difficult to install, difficult to manage and required onerous pre-reqs.  We made good progress on the setup experience in TFS 2008, although most of that was oriented towards enterprise customers who needed more installation flexibility.

Microsoft has just announced the availability of Team Foundation Server 2010 Beta 2 along with the Ultimate, Premium and Professional editions of Visual Studio 2010.

These are some fast questions that have been answered by Hakan Eskici about the new release:

On a default configuration, Web Access is available at:

Where is Work Item Only View (previously known as WIWA)?

How can I install Web Access separately on its own server?

The recommended way is to install a “Application Tier Only” instance of TFS by pointing it to the same TFS database and using that instance just for Web Access. For example:

These are most recent statisitcs of the dogfooding (the team system's team TFS) Servers. These are just published this week. They can show how much scalable is the Team system to run and work in huge environments like Micrsoft. This is a message for all attackers from the Scalability point of view.

Brian Harry has just announced yesterday that their Team's TFS has reached the 1,000,000 check-in milestone.

the below graph shows the development of the check-ins curve 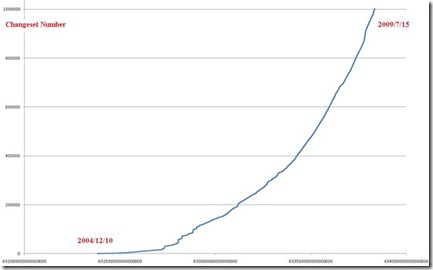 Here is an Important Page that is very important for everyone who used to use .NET Framework, VS.NET, and VSTS. It is very famous place that we all have to know about

Downloads Page
Posted by Ahmed Bahaa, Ph.D.,MS RD, and MVP at 6:26 AM No comments:

Brian Harry has declared the release of a new Guide for preventing/eliminating the TFS configuration and Installation problems. This is not a replacement of the TFS Best Practices Analyzer but, it is something that helps in addition to it.

As far as I know there is no downloadable offline version, only htm based version till now, which is still good.
Posted by Ahmed Bahaa, Ph.D.,MS RD, and MVP at 7:08 AM No comments: