In March 13, Gartner has published the new Cloud IaaS scores of AWS, Azure, and GCP, As mentioned by Gartner, "Compared to the previous assessments occurred mid-summer 2017, these new assessments show a steady growth in feature coverage by all three providers, with GCP leading the growth with an overall increment of 12 percent points. Azure follows with five additional percent points and AWS, which was the provider with the highest coverage also last year, marked an increment of four percent points. The figure below shows the details of the movements occurred within this update, broken down by required, preferred and optional criteria. It is interesting to note how some scores also went down (see Azure, required). When scores go down, it is not always due to providers removing features, but sometimes – like in this case – due to the modification of the applicability of the criteria’s scope". 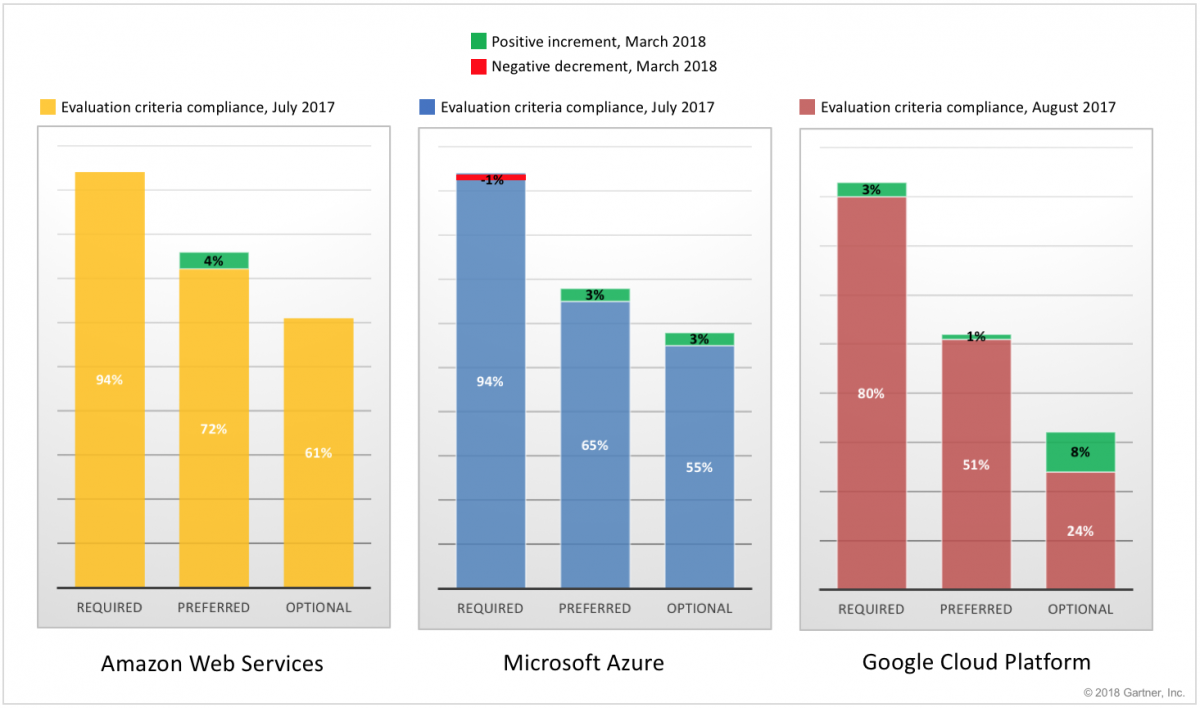 After becoming an increasing threat to Amazon in the public cloud space, and in the fourth quarter increased its market share from 16 to 20 percent, according to KeyBanc analysts, Microsoft Finally announced its plans for a major expansion of the Microsoft Cloud with the launch of its first cloud regions in the Middle East. These new regions, which are scheduled to go online in 2019, will be located in Abu Dhabi and Dubai and will host the company’s usual Azure, Office 365 and Dynamics 365 services.

“Microsoft has been present in the Middle East for more than two decades and is deeply invested in the region in many ways,” said Sayed Hashish, regional general manager, Microsoft Gulf, in today’s announcement.
"We see enormous opportunity in MEA (Middle East and Africa) for cloud technology to be the key driver of economic development, as well as provide sustainable solutions to many pressing issues such as youth employability, education and healthcare," Samer Abu-Ltaif, president of Microsoft Middle East Africa, said in a press release.
It’s worth noting that Amazon, too, has already announced its plans for a region in Bahrain, which will open in about a year, while Google has not announced any plans to enter this market yet.
In addition to the new Middle East regions, Microsoft also today announced its first region in Switzerland (with data centers around Geneva and Zürich), which is scheduled to go online in 2019. In Germany, the company is launching an additional cloud region and in France, the Microsoft Cloud is now generally available.
In total, Microsoft now offers 50 regions around the globe, with plans for 12 new regions in the works.
You could have more details in https://www.cnbc.com/2018/03/14/microsoft-plans-to-open-its-first-middle-east-data-centers-in-2019.html
Posted by Ahmed Bahaa, Ph.D.,MS RD, and MVP at 1:00 AM No comments: